In this roleplay the teams are setup so you can roleplay the final moments of season 10; re-enact the final crabs vs shoe thieves match, and the two ensuing matches against the gods. Or roleplay out new scenarios. What if the crabs lost to the dale during season 10 and then dale had to fight the peanut and won? What if Jersey Jolphins Real.

2. Why does the blaseball always shoot at homeplate and not where im aiming: A: because its using a slingshot script written by Roblox more than a decade ago.

3. Why does the Miami Dale and Jersey Jolphins get jerseys but the other teams don't A: becuase i only felt like making jerseys for those teams

4. Wheres the rest of the teams A: I didn't put them in

5. Do i have to make a roblox account to play this A: Yes 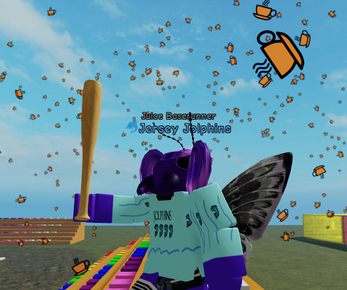